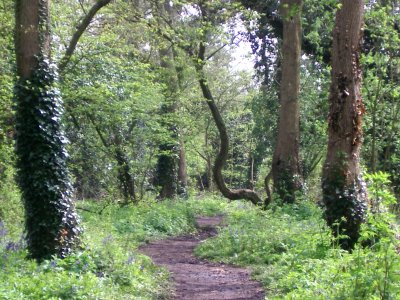 There is evidence of the woodland being ancient, which means that the land has been wooded for at least 400 years. This is indicated by a number of flower species which are often found growing in woodland of this age. Among these are bluebells, dog’s mercury, wood anemone and yellow archangel.

The woodland was left unmanaged for quite a long time, so the woodland canopy is made of fairly even-aged ash trees. The instability of this was seen during the storms of 1990 when areas in the middle of the wood were blown flat.

To encourage a diverse structure, and age range of trees, different species have been planted in the gaps left by storms. This also increases the variety of habitat for animals and plants. Ash, oak, field maple and a single crab apple are also found in the wood. The tall trees make a good nesting site for rooks, which can usually be seen or heard.

To diversify the woodland habitat still further, an open area called a ride has been created along the south-east edge of the wood between Wapley Bushes and the Western Wood. Butterflies and other insects are attracted to these warm, sheltered areas.

To the north an area of new woodland has been created along the existing woodland edge. This planting was undertaken as a community planting scheme on Mothers Day 1994, and it is now known as the Centenary Wood.

The scrub layer consists of dense thickets of privet, blackthorn and bramble. It is managed by cutting to prevent the wild flowers from being swamped and out-shaded and to allow the planted trees to grow in the gappy areas. Other areas of scrub are allowed to grow to provide cover for wildlife and nesting birds.

The heart of the wooded area is the Ancient Woodland, which is many centuries old as shown by a range of “indicator species” such as ********* supported by documentary evidence. As you wander through the wood, notice how the ground flora changes. Damper areas attract ferns, and next to the seasonal stream you will find the rather rare loose-spiked wood sedge (and if you’re very lucky, a toad)

As you follow the path that runs all the way round the Ancient Woodland you will see that many young trees have been planted in the wood. The high canopy of the woodland is mainly ash, and this will eventually fall victim to Ash Dieback Disease. The new trees are a mixture of native species that will grow tall and provide a suitable replacement habitat for our birds, insects, mammals, lichen etc. Look out for unusual trees like the pollarded “Dragon Tree” on the Lower Path, and the pair of “Dancing Trees” on the Upper Path.

The Centenary Wood, which dates from 1994, lies between the Ancient Woodland and the Upper Meadow. This is a very special place when it snows – you can get away from the crowds sledging on the Lower Meadow, into a forest setting that looks like Narnia, where the only footprints apart from your own are the birds and the woodland creatures.

There is always something to see in the woods. For example in early autumn you can try to count the number of types of fruit – everything from the berries our local birds love to the dangling bunches of “keys” on the ash trees. There are many different types of fungi – some on the ground, and bracket fungi such as King Alfred’s Cakes and some which can grow to the size of dinner plates.

As autumn advances, look closely at how the leaves change colour. The coldest, more exposed parts of the wood will change first, so the colours change from the top down and from the outside in.

The main woodland on the reserve has been continuously present on this site for hundreds of years so this woodland has been formally designated as an ancient woodland and the woodland is recorded in the Ancient Woodland Inventory. The woodland has a mix of canopy trees, understorey trees and shrubs and ground flora species. In particular, a number of ancient woodland indicator species can be seen on the woodland floor including bluebell, wood anemone, goldilocks buttercup and yellow archangel. Shrubs and small trees to look out for include elder, hawthorn, dogwood, holly and hazel. In the damper parts of the woodland, ferns such as male fern and hart’s-tongue fern can be seen.

The woodland serves as an excellent habitat for many bird species including chiffchaff, blackcap, song thrush, bullfinch, green woodpecker and goldcrest. Rooks have been breeding in the woodland since 1937 and the rookery in the south eastern part of the woodland is occupied each year when it becomes a noisy place. There are some butterflies to be found in the woodland including ringlet, speckled wood and holly blue and common pipistrelle and other bat species patrol the outside edges of the woodland hunting for insects on summer evenings.

Theme by Anders Norén — Up ↑