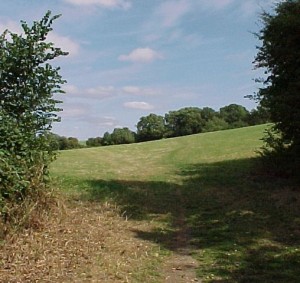 Starting from the northern corner of the wood near the railway bridge, we head north-east across the meadow towards the far corner. This is a neutral, well-drained grassland which is seen as a flower-rich hay meadow, over 90 species having been recorded altogether.

This diversity is maintained by the traditional management of a hay meadow and the absence of chemical use unlike in a modern, intensively farmed field where the nutrient level is kept artificially high by the application of fertilisers leading to the overdominance of one or two favoured grass species.

Particular species of interest include dyer’s greenweed and saw-wort, both unusual in the area, and both indicate an unploughed, chemically unimproved, neutral grassland. Cowslips are also abundant in the spring. The field is managed by hay cutting in late July or early August. This allows the spring and early summer and so ensures their survival in following years. This helps protect the vulnerable wild flowers, by preventing the stronger grasses and herbs from taking over.

Lots of different flowers lead to many kinds of insects, which feed off and pollinate them. The insects are then eaten by many birds and small mammals, such as voles, which in turn are preyed upon by sparrowhawks, foxes and other large carnivores at the top of the food chain.

This area all used to be farmland. Sargeants Farm has long since been built over by the new estates, but the modernised Sargeants Farm Bridge still leads across the Great Western Railway. This part of the London to South Wales line was built around 1902.

The Lower Meadow is a flower-rich grassland with more than 90 different species. It sustains a wide range of butterflies, moths and other insects. If you visit in peak flowering season it’s worth sitting down and waiting for the insects to come to you. Peer into the grass and look for the smaller creatures, and listen carefully for the constant sounds of the insect world.

The grassland is so diverse because it is not fertilised or grazed – fertiliser or animal droppings tend to produce one or two dominant species. The field is managed by hay cutting in June or July. This allows the spring and early summer flowers to seed themselves for following years. The nearby railway line brings in seeds that add to the diversity.

In winter snow the Lower Meadow is the best sledging field for miles around.

Special spots to explore include the small copse that hides the seasonal Lower Pond – a “green room” that is a real hideaway for children. Look out for frogs in the lush grass – the Common Frog is just as likely to be seen in moist grassland as in ponds.

Turn around at the top of the Lower Meadow to look out over the town to the Welsh hills and the Severn Bridge. On a clear day you can see up to the Brecon Beacons.

The lower meadow of Wapley Bushes Local Nature Reserve is the most biologically diverse area of the reserve and it includes over 70 wildflower and grass species. Many of the wildflowers are prominent, brightly coloured and are good for insects such as black knapweed, betony and devil’s-bit scabious. In medieval times and later, many plant species were used as medicinal plants and one of those plants can be found today in this meadow. That plant is meadowsweet and not only does it have a distinctive aroma but it also contains a natural aspirin compound so its leaves were used in herbal teas to reduce fevers.

Different flowers can be found at different times of the year in this meadow. For example, in spring there is a magnificent display of yellow cowslips and in summer there is a great show of common spotted orchids and they can found near to the side of the main woodland. That great variety of flowering plants also supports many insects including colourful butterflies and day flying moths such as the marbled white, meadow brown, common blue and six-spot burnet.

Theme by Anders Norén — Up ↑