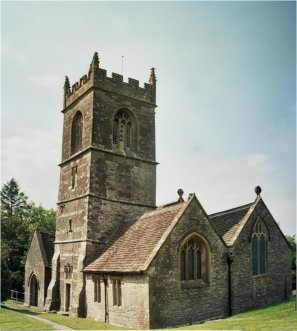 St Peter’s is just up the hill from the Nature Reserve. This beautiful little church was mainly built in the 13th century, including its tower in the Perpendicular style. The south porch is a bit newer – only 15th century.

St Peter’s claim to fame is that it contains the tomb of local hero Sir John Codrington, who died in 1475. He was the standard-bearer to King Henry V at the battle of Agincourt in 1415.

However, he’s not actually under the tomb. Like many elaborate tombs in other churches, this is a “show tomb”. There are suggestions that there once was a gravestone in the chancel floor, but Sir John isn’t there either. When the tower started to tilt dangerously, the Victorians dug out the floor and flooded it with concrete.

So where IS Sir John? Our best guess is that his remains are somewhere in the grassed hillock in the graveyard, which is where the Victorians dumped the spoil. So we’ve started to call the hillock “Sir John’s Tump”. Even if he’s not there, it’s a good story.