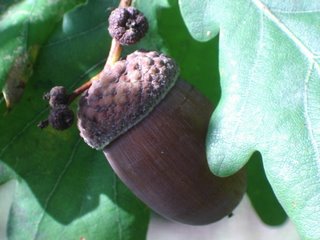 I was crossing the bridge between the two meadows, and across the bridge from the burnt-out tree I noticed acorns on the ground. Here is an acorn still on the tree. Notice how “woody” it looks, almost like a piece of manufactured furniture. Almost an advert for its parent tree.

Oak trees tend to remind me of the story of Robin Hood – the new BBC TV series, and the HTV series Robin of Sherwood that was filmed in the Bristol area, down by the river Frome.

According to the Royal Forestry Society, “Acorns in cups are a well known feature of an oak tree. The Anglo-Saxon name for oak was aik, so the seed was known as aik-com,” in other words OAK-CORN. Of course it’s a nut rather than a seed.

The photo shows an English or “pedunculate” oak, meaning that the acorns are on stalks. Acorns of the other common species, the sessile oak, don’t have stalks. Sessile means “sitting on”, so the acorn-cup sits directly on the shoot.

You would think that a heavy thing like an acorn wouldn’t travel far, but apparently they are often carried by birds for 250 metres, and sometimes even up to a kilometre.

Oaks used to be an important indirect food source for people. Mediaeval pigs (well, they called them swine back then) used to graze on the acorns, among other things. This practice was called “pannage”.

They’ve recently had problems in the New Forest because acorns are poisonous to ponies, so they’ve been asking commoners (people with grazing rights) to turn out their pigs to eat the acorns. Apparently an oak tree normally starts producing acorns after about 50 years and one mature tree will shed 50,000.