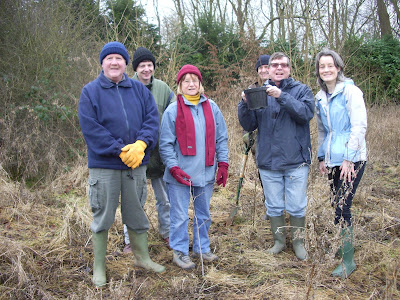 Over the last few decades Dutch Elm Disease, a fungus spread by bark beetles, has devastated the British elm population to the extent that many people have never seen a live mature elm tree.

Now however a multinational project involving a site near Yate may hold the key to repopulating elms in the UK. Members of the Wapley Bushes Conservation Group discovered a a native Wych Elm on the reserve that has remained unaffected by the disease, and they have have sent seeds from to the French national State Forestry Nursery for analysis to assess the extent of disease resistance.

The aim of the European project is to identify types of elm that are resistant to the disease so that eventually the resistant specimens can be planted out to repopulate the European countryside and help the many species that are dependent upon elms.

Tim Fairhead of the Conservation Group explains “In return we received seeds from ancient elm trees in a French Nature Reserve, and these were grown on at Portsmouth University. These particular trees contain high levels of unique bark compounds that deter feeding by the beetles so they are less likely to get infected in the first place. We hope these trees will go on to provide a resource and home for threatened and vulnerable species like the White-letter Hairstreak butterfly”

Volunteers from the Wapley Bushes Conservation Group are shown planting out the resistant saplings on Dodington Parish Council land at Wapley Bushes, together with South Glos Councillors Linda Boon and Claire Young. This is the only elm repopulation project of its type in the South West and one of only four sites in the UK.

Cllr Linda Boon said “It’s good to see such a significant initiative by a local volunteer group. Local groups like this are key to running our local nature reserves, together with support and expert advice from South Gloucestershire’s Environment Department”

Cllr Claire Young said “This is really good news. A whole generation has grown up who only know elms as dead tree skeletons in hedgerows. If this works we can start to repopulate the country’s landscape”