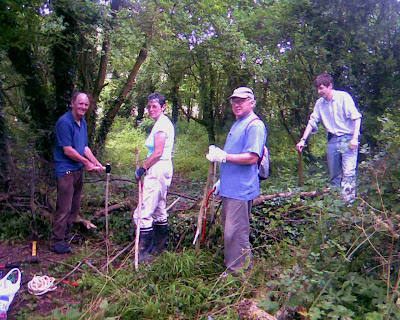 Starting to repair the dead hedge
– driving the uprights in 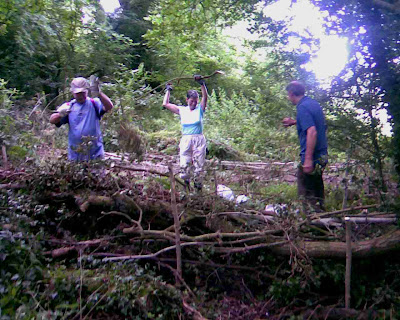 Filling up between the stakes to build the dead hedge
Our main task was to rebuild a delapidated dead hedge that protects a sensitive part of the woodland. We gathered a variety of material. Much of it came from a fallen bough, which we cut up and carried down to the workplace.

We also collected young trees we had cut down a while ago when coppicing in the Western Wood, and we took out some self-sown young ash that have appeared in the Upper Meadow.

We sharpened stout lengths of wood and drove them in as uprights, then filled in between them with heavy boughs as a foundation and then lighter branches on top.

Dead hedging is a traditional woodland management practice, and it works well with coppicing – in future we intend to use the coppiced wood as soon as we cut it. Previously we’ve left it to decay as habitat for insects etc, but it was too ready a source of firewood and much of it disappeared.

We had one more task to do before we finished. The diagonal path up through the Western Wood has been getting overgrown, so we cut back the brambles and cleared a way through.

Not bad for two and a half hours work! Our next work morning will be on Sunday 20 September – an early autumn tidy-up, including clearing leaf mould etc out of the little stream so that the centre of the wood doesn’t flood during winter rains. Please come and join us – ring Paul on 07771 562505 for details.

One thought on “Report from work morning 5 July – lots achieved!”