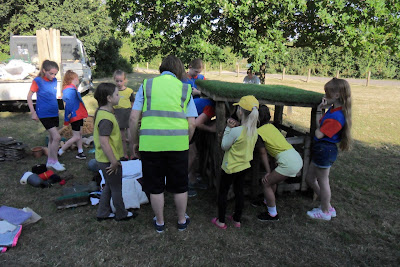 Young people from the 4th Chipping Sodbury Guides and Brownies have helped enthusiastically to furnish a new bug hotel for the orchard at Wapley Common. The event was organised after Dodington Parish Councillor Paul Hulbert, a member of Wapley Bushes Conservation Group, ran an Environment Evening for them at Abbotswood School. 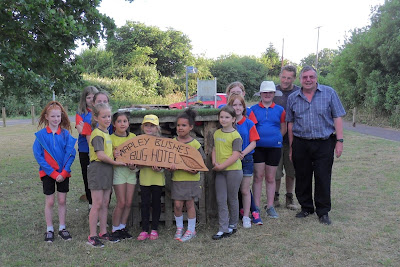 “The girls were so enthusiastic and knowledgeable that I invited them to do some practical work at Wapley” said Cllr Hulbert. “We’ve put a total of three new bug hotels on Wapley Common, and this one is very impressive”

“The Brownies and Guides worked really hard under the direction of our contractor Chris Belcher, who had already constructed the framework” 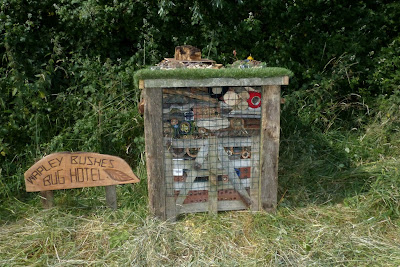 The bug hotels are part of the Orchard for the Future project organised by Wapley Bushes Conservation Group. There are three groups of young orchard trees on Wapley Common, and each group of trees now has its own bug hotel or “pollinator palace”. The intention is to encourage pollinating insects, so increasing the apple crops in future years so that local people can come and pick their own apples, all of which are local historic varieties that are not available in the shops.

There were ten Guides and Brownies plus four Leaders, plus the three of us that are involved with Wapley Bushes.